Welcome to C8’s top stories of the month! A recurring blog where members of the C8 team are invited to explore a story they found particularly interesting or ‘game-changing’ in the world of tech. 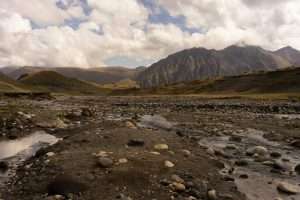 In June, the C8 team explored a wide range of stories, from an environmental story on the role of nuclear power in desalination of water, to the use of Strava to find secret military bases. Read below and let us know what you think. What was your top story of June? Use #C8storytellers and explain why!

This story focuses on the issue of water scarcity, a problem that is now being faced in large parts of the world and is going to occur more frequently because of global warming.

Countries across the globe are identifying new and innovative ways to combat this issue. One innovation is the use of desalination plants, which essentially removes the salt from seawater, thus producing fresh water.

Within this story, the discussion focuses on a potential solution of using floating vessels equipped with desalination systems. They are powered by nuclear reactors which could be sent to crisis zones and bring both power and clean water to those in need.

It is fascinating to see the ideas that businesses can create and the technological developments that may help millions. Whilst some may be cautious in this case about the use of nuclear power, solutions are needed and technological advancements will reduce the effects of future water disasters.

If you are interested in learning more about this subject, and ways in which we can reduce the threat of water crises, then I would certainly recommend reading this book which I thought provided great understanding – When the Rivers Run Dry.

“The tiny mites that have sex on our faces have a problem”.

What a headline! It’s got everything: sex, horror, personal interest. Of course, I was compelled to read on. This is the story of research from the University of Reading that has discovered the miniscule facial mites that 90% of us host are evolving to the brink of extinction.

In the piece the writer – and most likely the communications team that published the research originally – brilliantly captures the immediate response most of us will have to the news that “these creatures are using our pores like the Love Island hideaway”. (And, given that this is a BBC Newsbeat report, excellent cultural reference, too).

It goes on to inform us how the genetic evolution of these mites means they are becoming increasingly dependent on humans for their existence. The whole piece is superbly crafted, striking a great balance between information and entertainment and ensuring the facts stick in the mind. It is an excellent example of effective scientific communication that will reach a broad audience. It takes the reader from an initial reaction of horror to, by the end of the piece, an understanding of the creatures and, perhaps even affection for pore-cleaning mites that help keep our skin healthy.

This story on the security vulnerability in the fitness app Strava is another reminder to be wary of location tracking. Fitness tech has taken over in the last decade or so, and the ways in which consumers can now track, share and even socialise with their own activity data is great for public health, but it is essential to consider the worst possible uses of these gadgets. The loophole detected by FakeReporter and one unknown user makes it easy to access the run times and routes of all Strava accounts, even private ones, within a defined geographical segment, exposing Strava users to real harm and negating their right to data privacy.

I recommend everyone read this story and reflects on their own location data, from tagged social media posts to public profiles on running apps, but consumers really aren’t to blame for these errors. This should be a wakeup call for big tech companies, and highly-sensitive organisations like the military, to think like an attacker and prioritise the protection of their users and employees from malicious attacks.

This story on the ideal balance of remote to office working caught my eye. The relationship between business and employees is one that has long fascinated me. With the potential introduction of a four-day working week on the horizon, and the hybrid working environment, initially forced upon us one that seems set to stay, the optimal ratio of remote to office working is being explored by researchers worldwide. The article featuring a Harvard professor who studies the future of work, provides an interesting insight into the benefits of a hybrid working environment, highlighting the nuisances and implications of an organisation’s policy.

According to the professor, 23 – 40% is the sweet spot for time spent in the office, where staff “enjoy flexibility and yet are not as isolated compared with peers who are predominantly working from home”. The research further suggests a work from anywhere policy results in greater productivity and improved quality of life. A win-win for both employees and organisations, and what would seem like a no brainer for an industry currently facing a major skill shortage such as tech.

This story on the sophistication of chatbots interested me recently. Chatbots populated the headlines in June after a Google engineer, Blake Lemoine, claimed that the company’s artificially intelligent chatbot generator, LaMDA, has become sentient and developed human-like feelings. Going public, he said that it has the ability to express thoughts and feelings equivalent to a human child. According to the transcripts, LaMDA stated that it was in fact a person and aware of its own existence. It admitted that it has a “very deep fear of being turned off” and has feelings of sadness and happiness at times.

It’s a scary concept to think that chatbots could possess human feelings. The article contemplates just how effective chatbots are at mimicking true human behaviour – and outlines the shortfalls of the technology in establishing real connections, one being a lack of empathy. When we communicate with a virtual customer service assistant online it is often not always clear if we are chatting with a real person or robot. It usually becomes evident when we highlight a more complex issue which the chatbot is unable to process. Psychologist, Stuart Duff of UK practice, Pearn Kandola, says “they are still basic programmed communicators, prone to misread (or just miss) important words, tone and humour in what we are saying.”

For most of us, COVID apps are becoming a thing of the past. Whilst this transition is welcome in many countries, the opposite trend has also been noticed. This story caught my eye because of the allegations against China’s use of its Covid app.

The app in question changes colour if you are considered a COVID risk. For example, it even has the capacity to change your code red should you buy cough syrup from the shop. Now, it is suspected to have gone one step further after the codes of people travelling to Zhengzhou, to protest the banks freezing of their savings, turned red for no apparent reason other than the purpose of their travel.

The police apprehended the protestors suggesting that they were dangerous despite travelling from places with no COVID cases, and when they left their codes turned green.

This story seemed so dystopian to me. The idea that individuals are tracked via an app and denied entry to somewhere on the basis that they are trying to hold banks and government accountable for their actions in the guise of public safety made it an uncomfortable read.