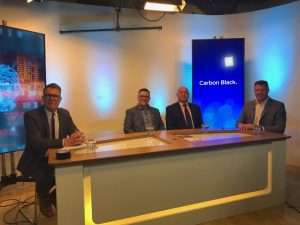 With Gartner stating that $96 billion is currently being spent by industry on security to protect our organisations against a cybercrime economy spending way over $1trillion, businesses are at a loss as to how to combat an adversary that is outspending them 10 to 1.

Shedding light on how to deal with these issues, Carbon Black had their Chief Cybersecurity Officer Tom Kellermann, as well as their Security Strategist Rick McElroy hosting a press roundtable.  C8 were pleased to welcome six journalists from leading B2B tech publications such as Enterprise Times, Computer weekly and SC Media, all of whom were interested in discussing Carbon Black’s latest research and ways organisations can keep attackers at bay.

Questions delved into how nation states such as Russia, China, and North Korea are actively supporting technologically advanced cyber militias, thus increasing risks of geopolitical conflicts and how this can have a tangible impact on global organisations and our connected way of life.

The fact that 92% of UK companies have experienced a breach in the last year, and nearly half have been breached multiple times, means it’s critical to educate UK businesses on the threats they face and how these threats can be mitigated. 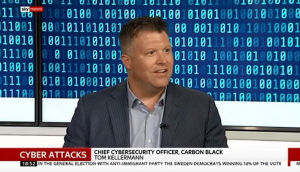 Through C8 Consulting and broadcast agency Markettiers, Carbon Black wanted to raise its UK and global media profile by leveraging Tom and Rick’s appearances at the summit. So, in addition to the roundtable, both gentlemen participated in several press opportunities. This included an interview with Sky News on Ian King Live, and a radio interview with Jazz FM Business Breakfast. We also secured a syndicated interview with Sky News Radio distributed across all UK commercial radio stations, achieving coverage from over 200 stations.

The Ian King Live interview was a great success – commanding a five-minute segment of the primetime evening business show. On Jazz FM, Rick McElroy was interviewed by Michael Barnier to discuss why businesses are being left behind by cybercriminal spending and what defences don’t work, as well as why no organisation should be embarrassed about being hacked.

To add to the broadcasting success, three speakers – Chris Phillips, Managing Director at IPPSO, along with both Tom and Rick, participated in a livestream broadcast alongside presenter Ian Collins.