Changing the future of plastic recycling

C8 Consulting helps Recycling Technologies raise equity investment from crowdfunding for its next stage of growth.

As everyone started to wind down for Christmas this year, so C8 started to wind up.  That’s because we were tasked with helping our client Recycling Technologies, a specialist in the feedstock recycling of mixed plastic waste,  embark on its next crowdfunding round which launched on the 29th November 2018 and ran until 11th January 2019.  So just as all the news of the Brexit crisis hit our screens – the postponement of the deal, votes of no confidence and one MP after another resigning – C8 focused on telling Recycling Technologies’ highly impressive story which will fundamentally change the future of plastic recycling.

Plastic is a fantastic material but only 12% is recycled at the end of its life. To solve the problem of plastic when it becomes waste, more capacity to recycle plastic 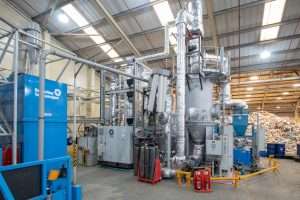 waste is urgently needed. Fortunately, the solution is within our grasp. Over the last six years, Recycling Technologies has developed and patented a machine, the RT7000, which recycles plastic waste back into a valuable product called Plaxx®, which can be used in processes for making new plastic and wax.

In 2018, C8 helped Recycling Technologies successfully raise equity investment with Crowdcube. The company ran two successful crowdfunding campaigns, the first, in the Spring of 2018, closed early having exceeded its target. The most recent campaign went live in the run up to and over Christmas 2018 and into early January 2019, attracting investment of £1.98M and exceeding its target of £1.3M. And while the funding round it still open, the crowdfunding element which C8 supported has now closed. Funding will help Recycling Technologies embark on the next stage of its journey as it builds, installs and commissions its first commercial RT7000 in the UK and then assembles and delivers an initial fleet of twelve RT7000s to meet the anticipated demand for urgently-needed plastics recycling capacity.

Over the two campaigns, with the help of C8, Recycling Technologies attracted considerable support from nearly 3,000 members of the public who invested in the business, as well as a substantial strategic investment of £1m from InterChem, a global petroleum and petrochemicals trader. To put the icing on the cake, now Recycling Technologies has just been nominated in the ‘Product of the Year’ category of the annual Crowdcube Awards.

During the last campaign, we drafted seven news announcements to generate interest from the media. We identified more than 10 comment and briefings opportunities including an exclusive radio interview with CEO Adrian Griffiths and BBC Wiltshire in January. Adrian was also interviewed by Ian King on Sky News where he talked about Recycling Technologies’ plans and the future of recycling.

We think that Marketing Communications Manager, Bronwen Jameson’s, simple but impactful comment when we sent our round up report sums up perfectly the collective spirit and commitment from all those involved in this successful campaign: “C8, this shows the fabulous contribution you made to this multi-platform campaign, congratulations!”